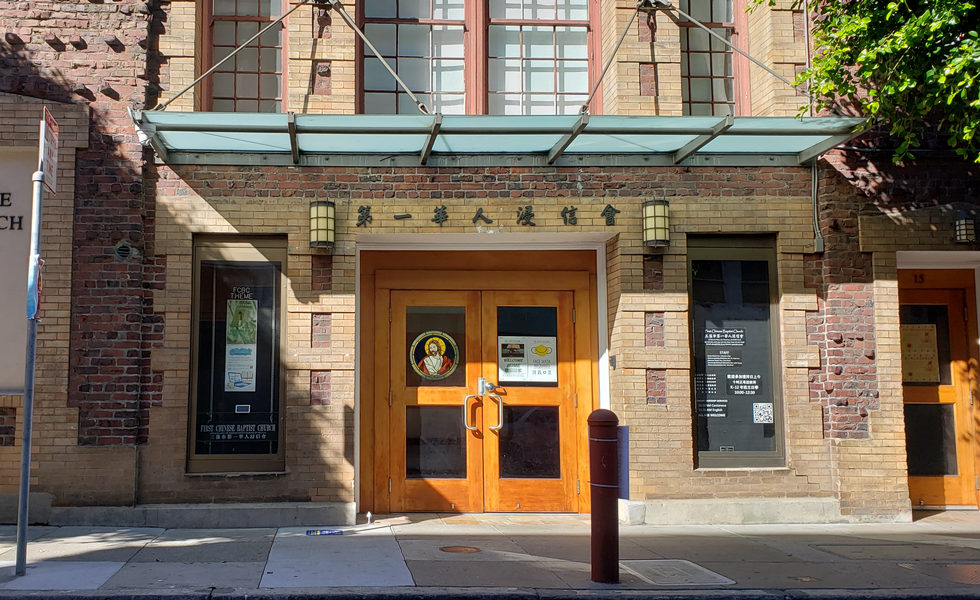 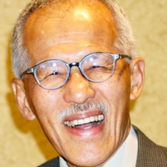 For as long as anyone can remember, receptions took place on the sidewalk. Before the church building was renovated in 1998, the vestibule or lobby was so tiny that it was really only an entryway. After the Service of Baptism, a Sidewalk Tea consisting of a sheet cake and of course, tea would be served on the sidewalk to welcome new members. In fact, a church cookbook created to celebrate the church’s 125th anniversary in 2005 was named “Sidewalk Tea.”

In San Francisco, the maintenance of the concrete sidewalk in front of our building is the responsibility of the First Chinese Baptist Church. When city workers come by periodically to identify cracked sidewalks, they spray places for repair in bright orange paint and leave a notice to have these areas fixed by a certain time or pay a penalty. Whether the church members are inside or outside on the sidewalk, the sidewalk is an extension of who we are as the church.

San Francisco Chinatown is one of the most popular tourist places in the world. Tourists from all over the world come to visit the largest Chinese community outside of China for dim sum, souvenirs, and often a sweatshirt because unlike LA, the Bay Area is often cooler when the fog comes in. After a weekend of visitors, there are usually remnants from people littering the sidewalk and curbs. To welcome people to worship, I began to sweep the sidewalk every Sunday morning. I sweep up cigarette butts, food wrappers, needles, and human excrement.

Ministering in the inner city is often a contrast between well-heeled members and those with great needs. We can feel threatened by strangers and people who are different from us. We can feel embattled from the outside and try to protect ourselves on the inside. One evidence of this is that our church’s stained-glass windows were caged from the outside to prevent any vandalism. The consequence is that during Eastertide when the sun is positioned to shine through our windows into the sanctuary, the wired cage is visible that sadly suggests that Christ is still in the tomb!

As people of the Resurrection, we are called to go outside. Most of the accounts of Jesus’ teachings and healings took place outside rather than inside.

As people of the Resurrection, we are called to go outside. Most of the accounts of Jesus’ teachings and healings took place outside rather than inside. When Chinatown created a tourist walk around the neighborhood, the church donated for three bronze medallions that are now embedded into the sidewalk in front of the church. They celebrate the church’s 125th anniversary in Chinese and in English. New custom-designed outside lights are on the wall of the church to light up our sidewalk for everyone to feel welcomed and safe, especially at night. The caged screens covering the stained-glass windows were removed when the building completed its earthquake retrofit. And a restored Head of Christ stained glass is illuminated 24 hours where it shines through our clear-glass front doors to serve as a blessing and hope in the world. When the church people may not be there, the church building continues to embrace the world on behalf of a loving God.

One night when I came down to the church for a meeting, I saw a young man with a knife chopping on the trunk of one of the three trees in front of the church. I told him to stop, and he questioned what authority I had. I told him I was the pastor. I asked who the group leader was. When no one answered, I said to the young man with a girl by his side that he was the leader. He was. I told him that if we lost this tree, there would be no shade for them to hang out. I told them that if they set fire to the church, there would be no sidewalk corner to hang out. Then I told the leader that when the church people are not here, I need him to watch out for the church building like it was his own. I asked him to come to the front door where my name and cell number were listed. I told him to call me if anything were to happen and that if anything were to happen to him, I would come to help him out. Even if young people are not coming inside the church, they are on the sidewalk in front of the church where God is.

Today, the caged screens are off the stained-glass windows, sidewalk teas continue to be served, a church leader has stepped to be the new sidewalk sweeper, and literally and symbolically, after the Benediction, the people of the Resurrection are still going outside.

Rev. Donald Ng was president, American Baptist Churches, USA, 2014-15, the first Asian American to serve in this elected position. For 17 years, he was senior pastor of the historic First Chinese Baptist Church in San Francisco. He retired from full-time ministry in 2015.