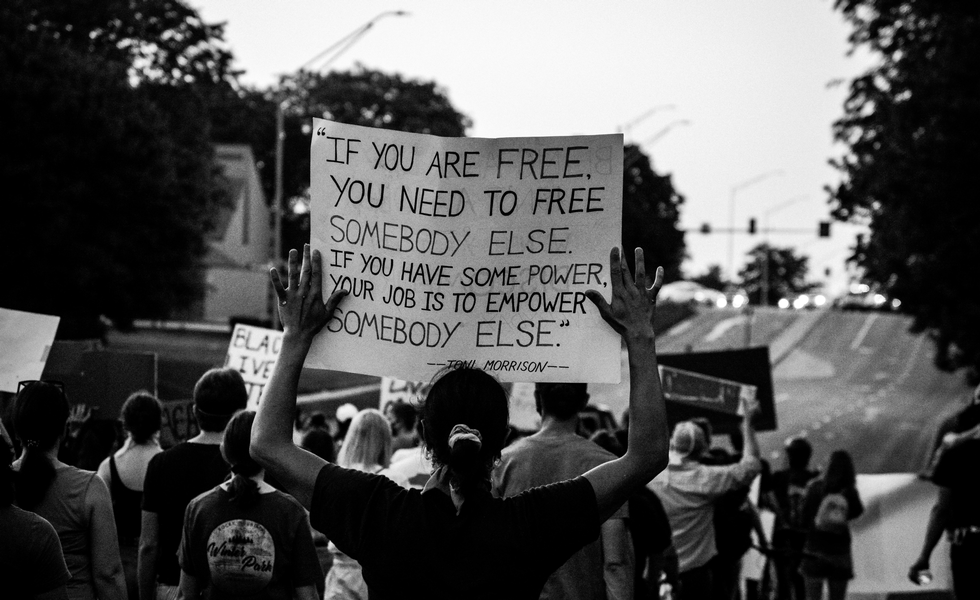 The quote is often attributed to scientist Albert Einstein: “Striving for social justice is the most valuable thing to do in life.” You can find it on many listings of quotes, but none provide an original source, so it is not substantiated. However, it is too good a quote to lose and whoever may have said it, it still inspires, stimulates, and challenges.

Whether or not Einstein said these words, the sentiment echoes the values of his life. Einstein was an anti-war activist and fought racism with a passion. Science writer Becky Oskin notes, “Einstein was keenly aware of the similarities between American segregation and the treatment of Jews in Germany. Before moving to Princeton, New Jersey, Einstein was harassed and denounced by the Nazis. But when he got to his new hometown in the United States, he found that it was also strictly segregated, with separate schools and movie theaters for blacks and whites. And at the time, Princeton University wouldn’t admit black students.” Years after Einstein, I too moved to Princeton, New Jersey. I lived a block up the road from Einstein’s house, and heard the lore of how Einstein would walk down the middle of the road, cars patiently following behind, while he licked an ice cream cone. I was not aware of segregation in Princeton at that time, but Einstein’s model inspired me to consider that you do not need to travel far from home for opportunities to strive for social justice.

Einstein supported a campaign to defend the Scottsboro Boys, nine Alabama teenagers who were falsely accused of rape in 1931. He welcomed opera star Marian Anderson into his home when Princeton’s Nassau Inn refused to rent her a room because of her skin color. In 1946, he boldly denounced racism in a commencement address at historically black Lincoln University in Philadelphia: “It is a disease of white people. I do not intend to be quiet about it.” In 1951, when the federal government indicted the 83-year-old W.E.B. Du Bois, founder of the National Association for the Advancement of Colored People (NAACP) as a “foreign agent,” Einstein offered to appear as a character witness during the trial—which convinced the judge to dismiss the case. Whether or not he said it in these words, Einstein’s life radiated the commitment that “Striving for social justice is the most valuable thing to do in life,” perhaps even more so than discovering the theory of relativity. Well, is it? That is, what is the most valuable thing to do in life?

My teenage granddaughter’s class trip to Washington, D. C. was cancelled, due to Covid. So, half a dozen mothers decided they would take their daughters and fly to D. C. to experience the sights and sounds of our nation’s capital. In telling me about the trip, my daughter expressed some concern that one of the families came from a political persuasion holding the opposite values of ours, and she was concerned that they might use the trip as an opportunity to bombard the kids and other mothers with what we consider extremist views. I responded that the most valuable thing for my granddaughter is that she learns to think for herself, to listen evaluatively and to think critically, when she confronts discordant views. No, said my daughter. The most important thing is for her to be kind to all people. I’m proud of her for that answer, I like my answer too, and I am challenged by the quote that “Striving for social justice is the most valuable thing to do in life.” How many “most” valuable things to do in life are there?

To consider that question, I am informed by my faith early encountered in the basement of a Baptist church in suburban Philadelphia. Perhaps the best filter for sifting all the valuable things to do in life comes from the prophet Micah (6:8): “He has told you, O mortal, what is good; and what does the LORD require of you but to do justice, and to love kindness, and to walk humbly with your God?” By this, both Einstein and my daughter are correct, as those who strive to walk humbly with their God are impelled to strive first for doing social justice and for loving kindness. Speaking of striving first, those were the words Jesus used in the Sermon on the Mount when he made clear what to put first: “Strive first for the kingdom of God and his righteousness.” (Matthew 6:33). One of the finest translations of the word for righteousness is right relationships. Again, Einstein and my daughter pursued the same aims.

I have sometimes labored under the illusion that striving for social justice falls more easily to those with extraverted personalities, those who are fully “out there” with people and with plentiful opportunities in their midst to speak and act for justice. Einstein again provided another model: “My passionate sense of social justice and social responsibility has always contrasted oddly with my pronounced lack of need for direct contact with other human beings and human communities. I am truly a ‘lone traveler’ and have never belonged to my country, my home, my friends, or even my immediate family, with my whole heart; in the face of all these ties, I have never lost a sense of distance and a need for solitude.” Perhaps it is solitude that undergirds the choice to act on behalf of others, to speak for and to stand with those on the margins and for those least valued by society.

The Hebrew word for “justice” is mishpat. Tim Keller writes of mishpat, “Its most basic meaning is to treat people equitably…It also means giving people their rights.” Justice has to do with how you treat people. People of faith could easily commit to striving for that as the most valuable thing to do in life. It doesn’t take an Einstein to figure that out.

Rev. John Zehring has served United Church of Christ congregations for 22 years as a pastor in Massachusetts, Rhode Island and Maine. He is the author of more than 30 books and e-books. His most recent book from Judson Press is “Get Your Church Ready to Grow: A Guide to Building Attendance and Participation.”

Photo by Kalea Morgan on Unsplash