The Day They Hid The Liberty Bell 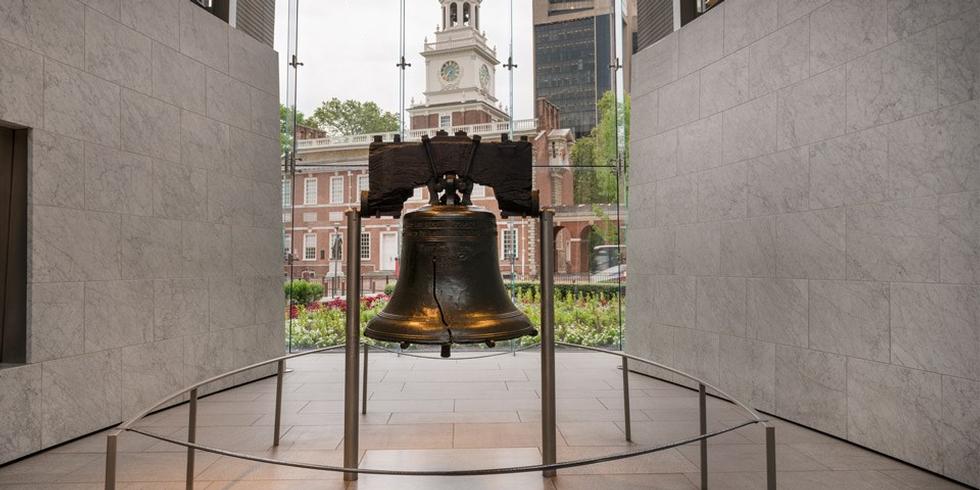 “Proclaim liberty throughout all the land unto all the inhabitants thereof.” (Leviticus 25:10 KJV)

A precious sketch for a painting hangs in my home depicting the day they moved the Liberty Bell from Philadelphia to hide it under the floor of the Old Zion Reformed Church in Allentown, Pennsylvania, where it remained until June 27, 1778. The painting is by Philadelphia-area artist Donald Cleveland Taber (1895-1981), my wife’s beloved grandfather. The church, now known as the Zion’s Reformed United Church of Christ, has the unique website of libertybellchurch.org and the church hosts the Liberty Bell Museum.

I was born in Philadelphia and like every school kid, our yellow buses delivered us on field trips to Independence Hall where we viewed the Liberty Bell. The bell did not always sit protected behind a bulletproof glass chamber. With my finger, I have traced the crack in the bell, perhaps reminding us always that freedom and liberty is a fragile blessing. With my knuckles, I have rapped the Liberty Bell to hear the ring of freedom. Let freedom ring throughout our land. My eyes were captivated by the quote on the top of the Liberty Bell, which bears the inscription from Leviticus 25:10: “Proclaim liberty throughout all the land unto all the inhabitants thereof.”

After our encounter with the bell and a tour of Independence Hall, we were escorted to the next most important site: the store! It was there I bought a mock parchment replica of the Declaration of Independence with its soaring language of freedom for all: “We hold these truths to be self-evident, that all men are created equal, that they are endowed by their Creator with certain unalienable Rights, that among these are Life, Liberty and the pursuit of Happiness.” Even in those days, a generation before inclusive language, I understood that menmeant all women, children and men. And I understood that the word all contained no exceptions.

In June 1753, the bell was hung in the old wooden steeple of the State House, erected on top of the brick tower. It was in use while the Continental Congress was in session in the State House, it rang out in defiance of British tax and trade restrictions, and it proclaimed the Boston Tea Party and the first public reading of the Declaration of Independence.

The website for the Liberty Bell Shrine in Allentown explains:

“At the signing of the Declaration of Independence, the bell of Independence Hall rang to proclaim liberty throughout the land…But a year later things were going badly for Washington and the patriots. Philadelphia was about to fall into enemy hands. The British were running low on ammunition, and it was known that they would melt the city’s church bells for musket and cannon balls. The nation’s Executive Council decided to send the bells to the village of Northampton, now known as Allentown. A train of 700 wagons was organized to carry military stores to Bethlehem. The Liberty Bell was aboard one of these wagons…After its arrival at Bethlehem, the bells were hauled to Northampton, where they were hidden under the floor of Old Zion Reformed Church, where they remained until the British evacuated Philadelphia. The Liberty Bell and church bells were then restored to their proper places.”

The painting by Donald Cleveland Taber depicts the moving of the Liberty Bell on the way to its hiding place at the Old Zion Reformed Church. The nation’s beloved and precious symbol of liberty, flawed as it may be, is a steadfast and bold reminder of the word “all.” “Proclaim liberty throughout all the land unto all the inhabitants thereof.” The intent of American liberty was always directed to all, although our practices, like the bell, contain some cracks in them. There are people who have been—and some who still are—excluded from this word “all.” In that, our nation has failed and has sinned. “Injustice anywhere is a threat to justice everywhere,” wrote Martin Luther King, Jr. in his Letter from Birmingham Jail. We as people of faith are called and compelled to serve as ambassadors for justice everywhere and to all.

The intent of American liberty was always directed to all, although our practices, like the bell, contain some cracks in them.

The Liberty Bell extends its palms up and open arms message to all. At a time when our nation’s polarization divides opinions about who is welcome and who is not, and when America’s leaders at the highest levels close borders, build walls and contradict the welcome offered by the words on the baseplate of our nation’s Statue of Liberty, we need once again to hear the Liberty Bell’s ring of liberty with an emphasis on the word “all.”

It’s hard to grow up visiting the Liberty Bell, just blocks from where Betsy Ross pieced together America’s first flag, and not feel a sense of national pride and patriotism. And yet, patriotism has an ugly side to it, when it is blind, deaf, dumb, closed-minded and unwelcoming. I confess a stomach-turning discomfort when I witness giant-sized American flags waving from car dealers, flag presentation ceremonies in worship services or the pseudo-patriotism of political rallies enveloped in red, white and blue. But they may not co-opt a true sense of patriotism away from me, or from the intent of the Liberty Bell’s ring of freedom.

“True patriotism hates injustice in its own land more than anywhere else,” goes a quote attributed to Clarence Darrow. Injustice occurs when the word “all” contains exceptions, even those hidden beneath the surface of civility. That injustice is worthy to be hated, when liberty excludes Mexicans, Muslims, Medicare recipients, LGBTQ people, those with a skin pigment different than yours, those who are differently abled, or those who exercise their freedom to disagree with or to protest against injustice.

Let us, true patriots, accept the call from Leviticus and from Philadelphia to be proclaimers of liberty throughout all the land unto all the inhabitants. Let us be true to the word “all.” Let us labor so that the ring of freedom need never again to be hidden under the floorboards.