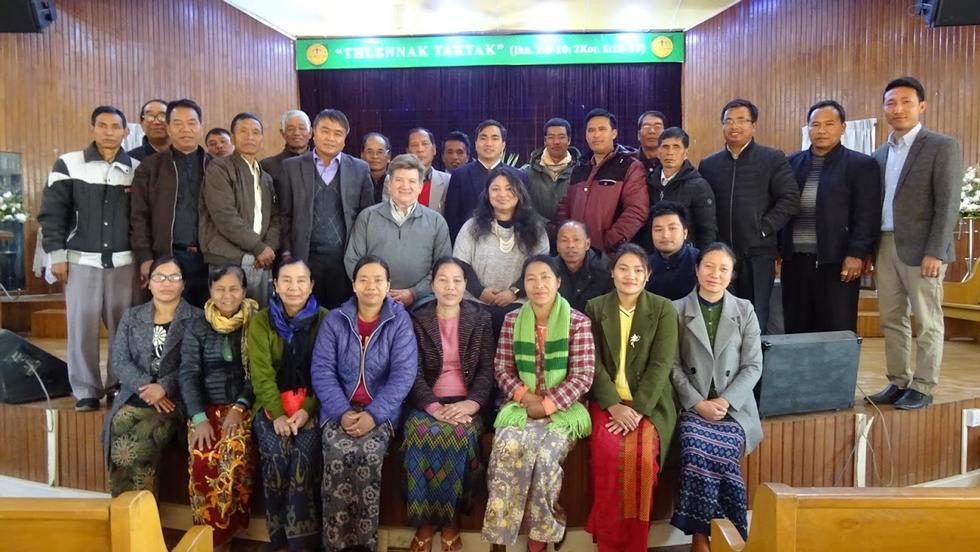 A delegation of American Baptist leaders, including general secretary emeritus, A. Roy Medley, visited Kachin State, Myanmar, January 4-9, 2019. Dr. Medley spoke with The Christian Citizen about the concerns facing the Kachin people, the suffering of the Christian community in Myanmar, and the prospects for renewing the stalled peace process.

You spent the first week of January with American Baptist leaders in the Kachin State, Myanmar. With whom did you meet? We met with Kachin Baptist Convention and Kachin State leaders, visited five Internally Displaced Persons (IDP) camps and multiple churches as well as the Kachin Baptist Theological Seminary, among others.

A ceasefire has been declared by the military, the Tatmadaw. Has the situation for Internally Displaced Persons in the Kachin State improved as a result? The major military offenses have lessened and there is a four-month ceasefire in place. However, because the military has announced they will renew military offenses after the ceasefire, there is great uncertainty for the IDPs. We heard many stories of people caught in skirmishes between the military and the Kachin Independent Army (KIA) as they fled their homes to seek refuge in the camps or in the jungle. There are approximately 100,000 IDPs. That number has not diminished.

How has the Kachin Baptist Convention (KBC) responded? KBC has coordinated the efforts of churches and Non-Governmental Organizations (NGOs) providing food and medical supplies in the camps.

What is life like in the camps? Many are on existing church properties. Shelters are adequate but cramped. There are few opportunities to work and little to no space to garden. At many of the camps, children are attending public schools and there is less of a clear social divide at school between children from the camp and children from the village. This is an improvement from a visit I made four years ago, but IDPs still live as outsiders and long to return to their ancestral homes.

What are their concerns about returning home? Some have had their fields mined by the military or militias. Others have had their property confiscated by the Tatmadaw. In some cases, properties are being leased by the Tatmadaw to Chinese agribusiness or for mining precious gems and minerals. The wealth from these arrangements is widely known to flow to the generals, their families and cronies.

If and when they do return, will the Kachin be able to reclaim their land? Proving ownership of land is a real concern. There are no deeds. Families have farmed the same land for generations. Villagers knew the boundaries of ownership and respected them. No one needed a document as proof the land was theirs. Now, demands for such documentation are often used to prevent them from reclaiming their property.

There is a devasting drug crisis among Kachin youth, including a surge in deaths due to overdose and an upward spiral in rates of HIV and hepatitis infection. How has the KBC responded? The KBC and others have been active against the drug trade, marshalling groups of volunteers to burn poppy fields and patrol communities. Their efforts are opposed by the military and militias. Many speak of the promotion of drugs as a form of genocide targeting Kachin youth, the future of the Kachin people, for destruction. Genocide takes forms other than armed conflict. This includes less visibly violent—but no less deadly—methods like introducing and maintaining a culture of drug addiction.

The persecution of Rohingya Muslims is well known. To what extent do the Kachin and other ethnic Christians face discrimination? The discrimination ethnic Christians face is two-fold. As ethnic, tribal people, they are considered inferior. As Christians, they are considered not fully Burmese, for to be Burmese for most people in Burma one must be Buddhist. While the Myanmar Constitution of 2008 recognizes Christianity, in effect, there is still persecution of Christians in many areas. More generally, discrimination keeps Christians from positions of leadership in government, business, and society at large. While the plight of the Rohingya is horrific, it has drawn attention from the suffering of the Christian community in Myanmar.

The military looms large in Burmese life. What did you see on this most recent trip? In both the Kachin State and in Yangon we heard a constant refrain, “we have two governments.” Though there is a civilian government, the government does not control the military. The 2008 constitution solidified the Tatmadaw’s political role by granting them one-quarter of the seats in parliament and control of certain facets of government. They have de facto veto power over legislation.

What about corruption? The Tatmadaw is a source of wealth for many. The income from lands that are confiscated and leased or sold flows into the pockets of the generals and their families. Powerful players are also said to profit from the increasing drug trade in the country.

Where is the elected government in all this? They appear toothless and incapable of reining in the military. Many of the ethnic people put great confidence in Aung San Suu Kyi, but because they don’t hear her voice on their behalf or sense progress in democratization and the peace process, they are losing that confidence. At the same time, the bewildering array of ethnic independent armed groups and political entities which united in support of her seem incapable of offering up a unifying figure apart from her. There is palpable despair about the ability of the elected government to develop into a robust expression of democracy.

What is the status of the ceasefire and peace process? There are many players in the peace process. By some estimates, there are more than 100 armed ethnic groups in the country. The largest group of ethnic organizations are pressing for a comprehensive ceasefire as a precondition for reopening the peace process. These groups want a rewrite of the constitution to embrace federalism and the rights of the constituent states, and to bring the military under the control of the civilian government. Meanwhile, the military is demanding that armed ethnic groups be disarmed.

Where are the Kachin in this process? The Kachin Independent Organization (KIO) recently sent an important signal to the military and civilian government that their aim is not to secede from Myanmar. The Kachin Independent Army (KIA), which operates under the KIO, is one of the largest armed ethnic organizations and has grassroots support of the Kachin people. They have refused to sign the ceasefire without clear support from the Kachin people. The Kachin are one of the strongest voices for a definition of federalism that grants authority to the states in areas such as education and the maintenance of a militia within the state.

What about external players in this process? China has been a positive influence in bringing factions to the table, but their latest tactics are viewed as strong-arming the ethnic groups along the border as they press their own economic and political interests. The U.N. is suspect because it has incorporated retired Tatmadaw generals on its staff. Japan is a significant outside party. At this point, the United States is not.

What do you believe needs to happen to improve the situation in the Kachin State and Myanmar as a whole? The roadmap to peace negotiations, which are now stalled, is littered with many failures. I pray God will raise up prophetic leaders and soften the hearts of key generals. In the meantime, it is important that American Baptist Churches use its voice to keep the concerns of the refugees and IDPs before our churches, government, and global community. Wherever possible, American Baptists must lend our support to efforts for full democratization and religious liberty.

Curtis Ramsey-Lucas is editor of The Christian Citizen, a publication of American Baptist Home Mission Societies.