Executive Order 9066: In The Dark Days Of WWII, Fear Translates To Injustice Of Internment For Japanese Americans 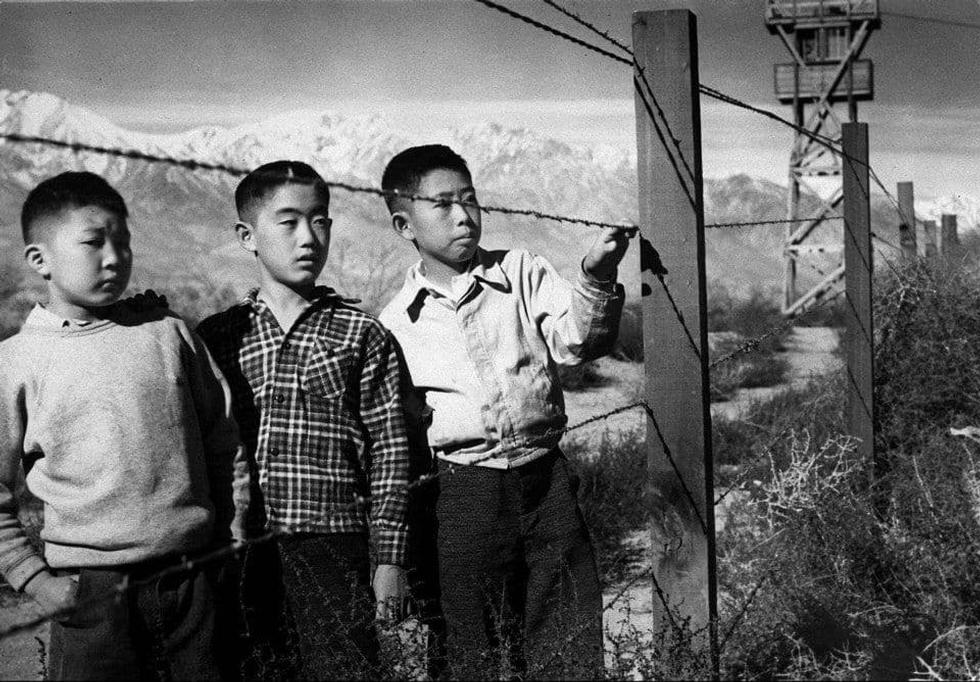 The evacuation and internment of Japanese Americans during World War II is a painful, yet important, reminder of the dangers inherent in majority rule. An important check on this power to sway governance for good or ill is the voice of people for whom God’s righteous reign is the supreme goal.

Insofar as God gives us the ability to know what is right, Christians must stand firm and advocate for those who are in jeopardy and without access to power, speaking with and for our neighbors in need. Proverbs 31:8-9 ESV calls out: “Open your mouth for the mute, for the rights of those who are destitute. Open your mouth, judge righteously, defend the rights of the poor and needy.”

“Allowed only what they could carry, families were forced to abandon homes, friends, farms and businesses to live in ten relocation centers guarded by armed troops and surrounded by barbed wire fences,” reads the inscription on the National Japanese American Memorial to Patriotism During World War II. Almost three-quarters were U.S. citizens, possessing the same constitutional rights as those who dispatched them to centers located in desolate areas of Utah, Arizona, Wyoming, Arkansas, Colorado, Idaho and California to be held against their will.

During World War II, thousands of men, women and children of Japanese descent were unjustly imprisoned, by executive order, in U.S. internment camps because of wartime hysteria and fear that they would serve as spies for the country of their heritage. Subjected to harsh living conditions, Japanese immigrants in the camps included parents of American-born young men fighting in U.S. military units. Two-thirds of those interned, born on American soil, were U.S. citizens. Society turned its back, but American Baptist missionaries stood with the oppressed, affirming them as brothers and sisters in Christ, and ministering to their needs.

The son of an American Baptist pastor of the Japanese Baptist Church in Seattle, Washington, founded in 1899, Brooks Andrews recalls those terrible days: “I was five years old. My father, Emery E. Andrews (Andy, as he was affectionately called), ministered to the second-generation Japanese, the Nisei, who were American citizens, not by immigration, not by chance, but by birth. Our church was closed by Mother’s Day 1942. Our friends were herded like animals to a holding site named, ironically, Camp Harmony, in Puyallup, Washington. The troop trucks disgorged their innocence into holding pens of Camp Harmony. Stalls that at one time held legitimate livestock now held human livestock that had no legitimacy in where they were or what they were.”

Andy moved his family to Twin Falls, Idaho, to continue ministry in Camp Minidoka, where 13,000 U.S. citizens were incarcerated. “If one were to juxtapose a picture of Minidoka with a picture of the camp in Dachau, Germany, it would be difficult to tell the difference,” Brooks Andrews says. As word got around that they were ministering to “prisoners of war,” the Andrews were subject to threats and name-calling, variously called “traitor,” “turncoat” or “Jap lover.”

Andy went to the camp almost daily. He provided spiritual counsel and officiated at weddings and funerals. “Our house soon became a hostel for young men from the camp who were able to secure a job in Twin Falls. They stayed at the house during the week and went back to their families in camp on the weekend.

“Once, when my father went to eat at a café in the town, he waited for a long time to be served. Finally, the owner of the café appeared and threw him out onto the sidewalk. That same café owner stood in front of our rented house and hurled ugly epithets at us in a loud voice. A short time later he bought the house we rented and forced us to move. The FBI was a frequent visitor to our house, grilling my father, at times up to three hours. My childish mind could not comprehend the mystery of the situation: ‘Am I an enemy of my own country?’ ”

Another time, when his father stopped in southern Idaho to get gas, the attendant, after a long delay, looked into the back seat of the car at two foreign-born fathers. “Are those men Japs?” he demanded.

Emery Andrews answered, “They are the fathers of two young men who are fighting in Europe for you and me!”

The attendant refused to sell him gas.

Four generations of Yosh Nakagawa’s family have been touched by the ministry of the Japanese Baptist Church in Seattle. Nakagawa served American Baptist Churches USA for more than 35 years as a layperson and now is involved with American Baptist groups, the National Intra-Caucus Council and Evergreen Baptist Association. He remembers, “In the spring of 1942, the church closed due to Executive Order 9066 and was boarded up. By Mother’s Day, Pastor Emery Andrews had lost his entire congregation to internment. The church became a warehouse for internees’ belongings.

“The racism, prejudice and violence they experienced from the public for their stand on the support of the Nikkei [first- and second-generation Japanese Americans] against their incarceration must have been fearful and life threatening. But no matter what the hysteria of hate was, the missionaries identified with the Nikkei people they came to serve and uprooted their lives and families to minister the good news in the lordship of Jesus Christ.

“The racism, prejudice and violence they experienced from the public for their stand on the support of the Nikkei [first- and second-generation Japanese Americans] against their incarceration must have been fearful and life threatening. But no matter what the hysteria of hate was, the missionaries identified with the Nikkei people they came to serve and uprooted their lives and families to minister the good news in the lordship of Jesus Christ.

“In the larger context they, too, became a hated minority where they lived in their ‘free community,’ only to find they were also behind barbed-wire fences. But the Nikkei people they served were a total community and not limited to Baptists. One must understand the gratitude of the people who will always remember what is rooted in the commitment of our American Baptist missionaries. The Nikkei community takes their pilgrimage back to Minidoka Internment Center today, a place where they never wanted to be, and the communities of southern Idaho that now welcome them, when they earlier hated the Nikkeis’ very presence. It certainly validates the missionaries’ vision and prophetic stance of justice, freedom and peace.”

In May 1946 the Japanese Baptist Church reopened, upon the return of the Nikkei population to Seattle. It would take a few decades for the U.S. government to recognize the wrongs it had perpetrated against Japanese Americans during World War II. In 1983 the Federal Commission on Wartime Relocation and Internment of Civilians found that there was no military necessity for the relocation and internment of Japanese Americans.

Congress later passed legislation providing redress in 1988. When signing the bill, President Ronald Reagan said, “No payment can make up for those lost years. So what is most important in this bill has less to do with property than with honor.” This was followed in October 1990 by an apology from the government of the United States through President George H.W. Bush, who wrote, “We can never fully right the wrongs of the past. But we can take a clear stand for justice and recognize that serious injustices were done to Japanese Americans during World War II.”

James A. Michener, in the introduction to Michi Weglyn’s book, Years of Infamy: The Untold Story of America’s Concentration Camps, takes a particular interest in the actions of Earl Warren, one decision maker during World War II. Then attorney general of California, Warren urged the speedy removal of Japanese Americans from the West Coast. Michener says, “[Warren] acted in an unconscionable manner apparently foreseeing that if he gained local popularity by inflammatory acts against the Japanese he stood a good chance of being elected governor later on.” (1)

Paul Nagano, who served as an American Baptist pastor at a camp in Poston, Arizona, also focused on the actions of Warren, who did become governor of California and was eventually a chief justice on the Supreme Court. Warren frequently attended First Baptist Church of Oakland, California, and while Nagano notes how Warren succumbed to personal ambition and political expediency, he then observes, “In later life, when he must have recognized the cruel folly of his wartime behavior, he became a stalwart defender of individual freedoms, a crusader for social justice, one of our renowned Supreme Court Justices.” (2)

Warren wrote in his memoirs, “I have since deeply regretted the removal order. Whenever I thought of the innocent children who were torn from home, school friends, and congenial surrounding, I was conscience stricken.” (3) Nagano suggests the ambivalence portrayed by Warren is reflected in the position of the church. “In retrospect we wonder if the unconstitutional evacuation and internment of the Japanese Americans could have been averted if Warren, as Attorney General of California, with his Christian background, had taken a stand for justice and upheld the fundamental principles of the Constitution of the United States.” (4)

We are called in our own day to stand with and for our neighbor in need. And if we are faithful, perhaps future generations will have less cause to ask how things might have been different had we, with our Christian backgrounds, taken a stand for justice.

We are called in our own day to stand with and for our neighbor in need. And if we are faithful, perhaps future generations will have less cause to ask how things might have been different had we, with our Christian backgrounds, taken a stand for justice.