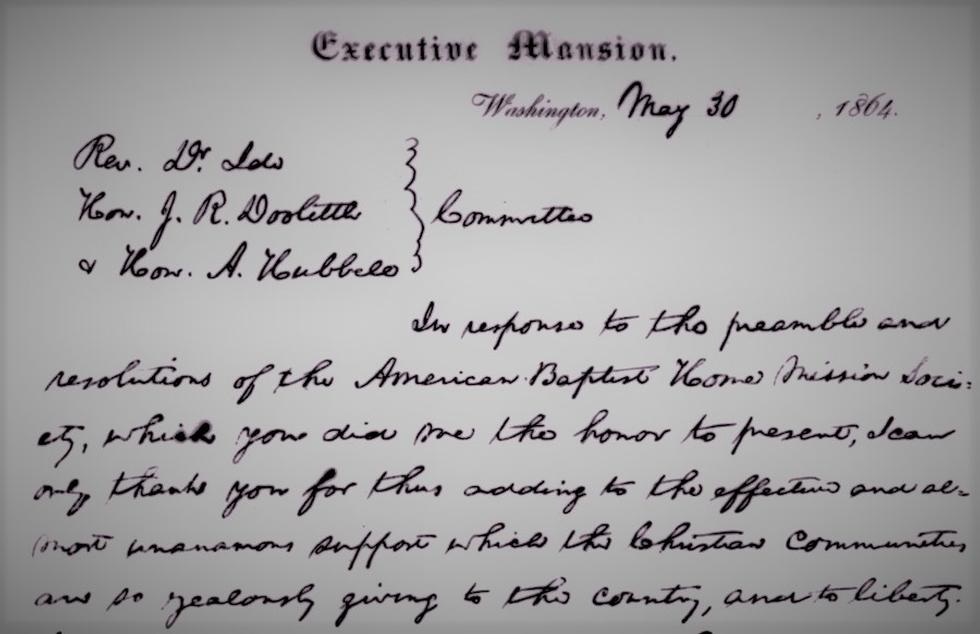 The year was 1864. The very fabric of the nation and the churches in America had been torn asunder by the Civil War. American Baptists were so passionate about the social justice issues that prompted the conflict, that representatives of the American Baptist Home Mission Society (ABHMS) met with President Abraham Lincoln to share their loyalty to the North’s position.

In the February 1909 edition of Baptist Home Mission Monthly, Howard Grose wrote, “When the Civil War came, the Home Mission Society was the medium through which the Northern Baptists expressed their loyalty to the Government.” So it was natural that at the Society’s annual meeting in Philadelphia in 1864, “when the country was enveloped in thick darkness and men’s hearts almost failed for fear of the issue of the conflict, the Society took strong ground to aid and comfort the Government.”

Resolutions were adopted declaring the rebellion “a crime against civilization, humanity, freedom, and God,” recommending, “That we tender to the President of the United States and to those associated with him in the Government, the assurance of our entire confidence and our earnest sympathy with them in their efforts to maintain the integrity of the Republic; of our prayers for their success; of our readiness to sustain them by the sacrifice of property and life; and of our hearty assent to the policy of conquering disunion by the uprooting of slavery?—?its cause.”

But there was hope in the ABHMS conclusion, “That, however prolonged may be the conflict, and whatever its cost, our trust in the final triumph of liberty and righteousness remains unshaken; and that, equally in defeat as in victory, we hold fast to the conviction that a merciful though chastening God will, in His own time, bring forth from the carnage and woe of this civil war a brighter, grander future for our country and the world.”

Members unanimously adopted the resolutions, “after earnest and patriotic utterances from several brethren,” and decided “copies of these resolutions be presented to the President of the United States and the Secretary of War.” A representative committee?—?comprised of Dr. Ide, the Honorable Senator Doolittle, and the Honorable A. Hubbell?—?was charged with visiting Washington and presenting “said resolutions, duly signed by the President and Secretary of this body.”

On the Saturday immediately following the meeting, Ide, Doolittle, and Hubbell, accompanied by a delegation of more than 100 ABHMS members, traveled to Washington where they were cordially received by President Lincoln.

The visit must have cheered Lincoln. In his letter following the meeting, Lincoln writes, “I can only thank you for thus adding to the effective and almost unanimous support which the Christian communities are so zealously giving to the country and to liberty.”

The visit must have cheered Lincoln. In his letter following the meeting, Lincoln writes, “I can only thank you for thus adding to the effective and almost unanimous support which the Christian communities are so zealously giving to the country and to liberty.” Lincoln goes on to offer perhaps his strongest condemnation of southern Christians for their support of slavery, suggesting they had insulted God and God’s church “far more than did Satan when he tempted the Savior with the kingdoms of the earth.” Still, Lincoln concludes, “But let me forbear, remembering it is also written, ‘Judge not, lest ye be judged.’”

Included in the May 1864 ABHMS meeting report is a note that “the President responded verbally, in the most courteous manner, and subsequently replied in a written document, which is herewith appended.” Clarification follows that the written document was not received prior to the report being published.

The following year’s report also does not include the document, nor is it in the archives of the American Baptist Historical Society, suggesting it was never sent. It was, however, subsequently published in various collections of Lincoln’s writings and remains in the collection of Lincoln’s papers at the Library of Congress.

On May 28, 1864 Lincoln met with a delegation of Baptists, who presented him with a set of resolutions adopted at a recent convention that supported the war efforts of his administration. According to the New York Tribune, May 30, 1864, Lincoln expressed his gratitude in general terms and asked to be allowed to make his response to the resolutions in writing (Collected Works, VII, 365). This unsigned draft is the only copy of the response that has been located. The uncharacteristically severe chatisement of the Southern clergy, whom he accuses of having insulted God and exceeded the sins of Satan, may have caused Lincoln to withhold it.

In response to the preamble and resolutions of the American Baptist Home Mission Society, which you did me the honor to present, I can only thank you for thus adding to the effective and almost unanamous support which the Christian Communities are so zealously giving to the country, and to liberty. Indeed it is difficult to conceive how it could be otherwise with any one professing christianity, or even having ordinary perceptions of right and wrong. To read in the Bible, as the word of God himself, that “In the sweat of thy face shalt thou eat bread,” and to preach therefrom that, “In the sweat of other mens faces shalt thou eat bread”, to my mind can scarcely be reconciled with honest sincerity. When brought to my final reckoning, may I have to answer for robbing no man of his goods; yet more tolerable even this, than for robbing one of himself, and all that was his.

When, a year or two ago, those professedly holy men of the South, met in the semblance of prayer and devotion, and, in the name of Him who said “As you would all men should do unto you, do ye even so unto them” and appealed to the Christian world to aid them in doing to a whole race of men, as they would have no man do unto themselves, to my thinking, they contemned and insulted God and His Church, far more than did Satan when he tempted the Saviour with the Kingdoms of the earth. The devils attempt was no more false, and far less hypocritical. But let me forbear, remembering it is also written “Judge not, lest ye be judged.”

Curtis Ramsey-Lucas is editor of The Christian Citizen, a publication of American Baptist Home Mission Societies.