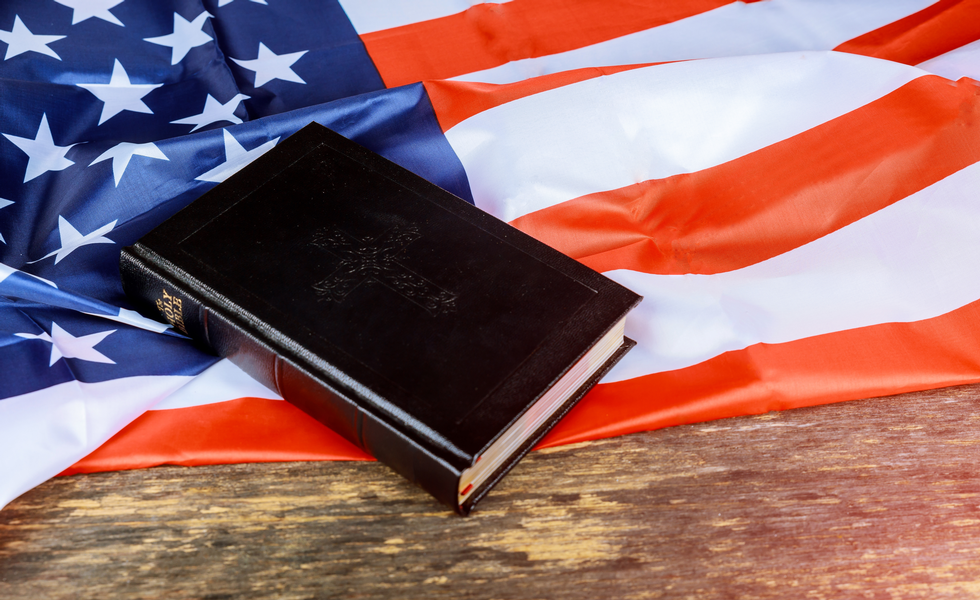 Visit a Christian church in the United States today, and you might spot two flags on the chancel: an American flag and a Christian flag. Nothing could better symbolize the reality that as Christians and Americans, we are citizens of two realms.

What does this mean for the faithful women and men who comprise America’s churches?

There is an inherent tension with this dual citizenship. Much of the time, we do not think about it. But when the values of our faith contradict the laws or practices of our government, what then?

It might prove helpful to remember how Jesus navigated his dual citizenship as both an adherent of the Jewish faith and a subject of the Roman government. In the synoptic gospels, we read about the Pharisees (Jewish leaders) and the Herodians (Roman loyalists) joining forces to trick Jesus, asking him if a good Jew should pay taxes to Caesar. If Jesus says, “No,” he will be at odds with the Roman law. If he says, “Yes,” he upsets his Jewish followers. “Give back to Caesar what is Caesar’s,” Jesus replies to the chagrin of his Jewish companions. It appears that Jesus has aligned with the Herodians. But then he continues, “and to God what is God’s.”[i] The tricksters offer Jesus a binary problem; Jesus responds with a non-binary solution. Matthew tells us that Jesus’ challengers are amazed by his answer; their false dichotomy exposed in the light of his wisdom.

Whether the rub as Christian citizens is between church and state or between Republican and Democrat, or something else entirely, wise followers of what the earliest believers called “The Way” must continually seek a third way: a higher way that exposes the fallacies of either/or thinking. Trinitarian expressions of faith were born for this.

The United States has a two-party system with either/or thinking built into its DNA. Citizens are pushed, pulled, dragged and cajoled into ascribing loyalty to one party or the other. Party identity often becomes a primary way we see ourselves and one another. When we begin to think of ourselves as “Democrat” or “Republican,” we can be confident that we have fallen prey to either/or thinking.

What does third-way wisdom look like in a congregational setting, especially in 2020 when a global pandemic rages and racial tensions flare in the midst of an election year? What can church leaders do to lift disparate people above the cacophony of partisan dog whistles and political posturing?

Name it. For starters, church leaders can name the tension. The election will be on the minds of worshippers in 2020. If church leaders ignore the election, or if we dance too delicately around the discord, we become irrelevant. Our message becomes anemic, sterile, impotent. Jesus was not afraid to name Caesar and God in the same lesson. We must not be afraid to name current reality. Church leaders, as responsible citizens, will ultimately cast votes borne out of a two-party system, but until and beyond that day, leaders must lift, prompt, urge and beckon believers up above the partisan fray. Wisdom seeks a third way.

Reframe it. Keeping the great commandment to love God and neighbor ever central, the job of the church is to constantly point people to a higher way. This calling is especially prescient during these polarizing days. “The left says this, the right says that, how might we look at this through the lens of faith?” As we explore that question together as church communities, we will be on the path to discovering a third way together. Wisdom seeks a third way.

Seeking a higher way, a third way, will be challenging. It will require a willingness of church members and leaders to sit with the tension on the way to third-way wisdom. It will summon us to seek to understand, holding loosely our need to be understood. It will necessitate deep listening; we must be prepared to be transformed by the conversation.

These are precarious days for leaders of “purple churches” (churches comprised of people who identify as both Democrat and Republican). Those who preach must “comfort the afflicted and afflict the comfortable.”[ii] A good rule of thumb for this kind of preaching: pastoral always, prophetic sometimes, partisan never. But preaching can be more than meeting people in the middle. Relevant preaching aims to be not apolitical, but transpolitical—aspiring to lift the collective vision higher, above zero-sum politics. Wisdom seeks a third way.

At our best, our nation and our faith share a common third-way vision: that the United States would be a land of “liberty and justice for all.”[iii] The church gains relevance as it points its communities to this ideal. This is no time for the church to be silent while partisan voices jockey for attention. Now is the time for the church to rise above the binary bickering, showing the world that wisdom seeks a third way.

Rev. Dr. Rhonda Abbott Blevins is the senior pastor of Chapel by the Sea in Clearwater Beach, Florida and an associate with Pinnacle Leadership Associates. Blevins holds a Doctor of Ministry from Mercer University’s McAfee School of Theology and previously served as the coordinator of CBF Kentucky. She and her husband, Terry, live with their two sons in Palm Harbor, Florida.

The Christian Citizen is partnering with Central Seminary to share articles from their series, “Beyond the Divisions: Faith and Politics 2020. For a full list of articles, visit here.

[iii] From the United States’ “Pledge of Allegiance,” written in its original form by Francis Bellamy in The Youth’s Companion, September 8, 1892.