“Of Many, One”—Ruth Bader Ginsburg And The Main Challenge Facing Our Country 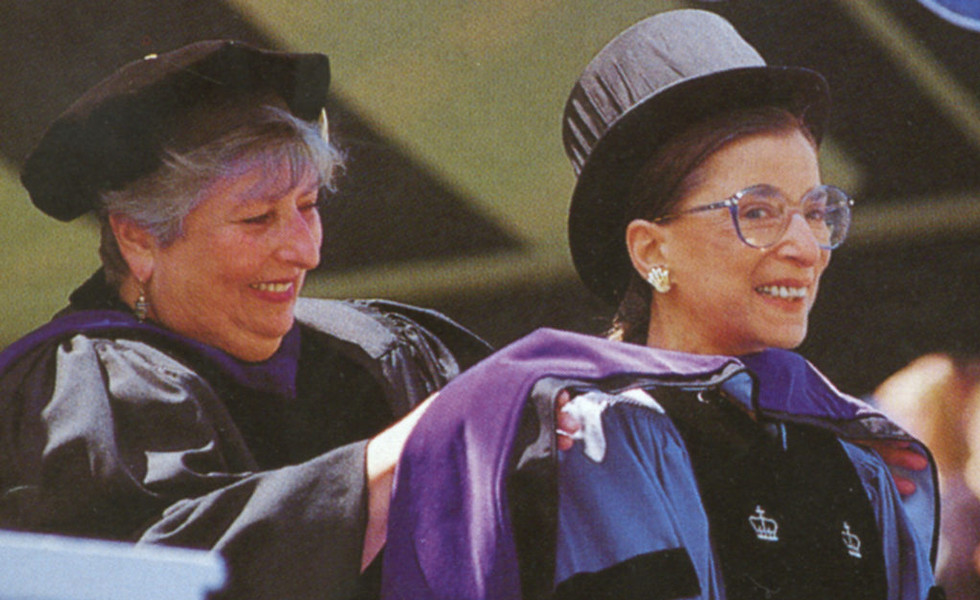 by Rev. John Zehring for The Christian Citizen

At my daughter’s graduation from Wheaton College in 1997, the commencement speaker was Supreme Court Justice Ruth Bader Ginsburg. I had the honor of delivering the invocation, and so I processed with the faculty, trustees, and dignitaries. Walking next to me was Marty Ginsburg. I have no idea how I did not put two and two together, but initially I did not connect my walking partner with the speaker. Marty and I discussed places we had lived and activities we enjoyed. When he said he had recently moved to Washington, D.C., I inquired as to why. He answered, “My wife got a good job.” As Ruth Bader Ginsburg approached the podium, the lightbulb flashed, and I finally made the connection.

In her remarks, Ginsburg told how “a college student came up to my table and asked if I could help with an assignment. She had one question and hoped to compose a paper by asking diverse people to respond. What, she asked, did I think was the largest problem for the next century. My mind raced past privacy concerns in the electronic age, assisted suicide, deadly weapons, outer space. I thought… of Thurgood Marshall's praise of the evolution of the concept, ‘We, the People,’ to include once excluded, ignored, or undervalued people, then of our nation's motto: E pluribus unum, of many, one.”

E pluribus unum is the motto suggested by the committee Congress appointed on July 4, 1776 to design “a seal for the United States of America.” The motto appears on our coins today as reminder that our states are united – one nation out of many.

“The challenge is to make and keep our communities places where we can tolerate, even celebrate, our differences, while pulling together for the common good,” Ginsburg said. “‘Of many, one’ is the main challenge, I believe, and my hope for our country and world.”

For those of us who consider Ginsburg a legendary heroine of American leadership, what she thought is of supreme interest. While we cannot know if, in 1997, Ginsburg anticipated the divisiveness of our society today, how visionary of her to recognize that E pluribus unum, our motto, applies to the people of the nation – to all the people – and not simply to state governments.

In advocating on behalf of those excluded, undervalued, ignored, Justice Ginsburg stood with prophetic thinkers throughout history—with King and Gandhi, Moses, the psalmist, the prophets, Paul, and Jesus—encouraging all people to embrace Godlike attitudes, values, words, and behavior.

The psalmist proclaims that God loves righteousness and justice (Psalm 33:5). In the Old Testament, justice describes how people are treated, especially widows, orphans, resident aliens (also called “sojourners” or “strangers”), wage earners, the poor, prisoners, slaves, and the sick (Job 29:12?17; Psalm 146:7?9; Malachi 3:5). Each of these groups has needs which keep its members from being able to participate fully in life. Justice involves meeting those needs.

The Hebrew Scriptures consistently condemn the forces which deprive people of life’s basic needs as oppressors (Micah 2:2; Ecclesiastes 4:1). To do justice is to correct that abuse and to meet those needs. The prophet Isaiah said to “learn to do good; seek justice, rescue the oppressed, defend the orphan, plead for the widow” (Isaiah 1:17). The work of including those once excluded, ignored, undervalued, is the work of justice.

Justice Ginsburg concluded her Wheaton commencement address, saying, “In the open society that is the American ideal, no doors should be closed to people willing to spend the hours of effort needed to make dreams come true. So, hold fast to your dreams, and work hard to make them a reality. And as you pursue your paths in life, leave tracks. Just as others have been way pavers for your aspirations and achievements, so you should aid those who will follow in your way. Think of your parents and teachers, of their efforts and hopes for you, then of your children and even grandchildren, of the world they will inhabit. Do your part to help move society to the place you would like it to be for the health and well-being of generations following your own.”

Justice Ruth Bader Ginsburg was a way paver who moved society forward for the well-being of future generations. May we too become way pavers to include all people in our nation’s vision of E pluribus unum.