America In Crisis—holding On To Hope 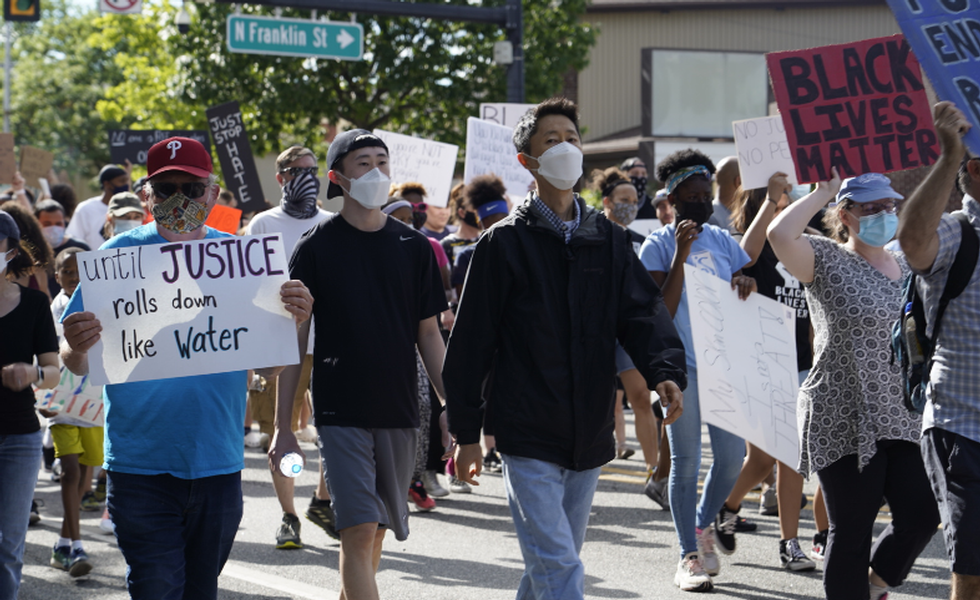 America is in crisis.

For more than a week, demonstrators from coast to coast have protested our collective outrage in the cruel death of unarmed, handcuffed 46-year-old George Floyd. Floyd, a black man, died after a white police officer pressed his knee on Floyd’s neck for nearly nine minutes. Like Eric Garner in July 2014 — who died following a chokehold by a New York City police officer — Floyd’s final words were, “I can’t breathe.”

We’ve watched in disbelief as Floyd was treated as less than human. We grieve for his family and those directly impacted by this painful death. As we struggle to process our grief, we cannot even begin to imagine what his loved ones are experiencing.

As sustained protests have multiplied, so has their powerful and passionate message: racism and police brutality are no longer acceptable. It’s a clarion call coming from a diverse, multi-racial, multigenerational Unites States of America, and it’s being echoed by our global neighbors.

Charges against Minneapolis Police Officer Derek Chauvin have been bumped up to include second-degree murder, in addition to third-degree murder and manslaughter. The three other former police officers involved in the killing are now charged with aiding and abetting.

Floyd’s murder was captured on a cell phone camera. It went viral. The horrible image of a man gasping for his last breath has left an indelible mark in our collective consciousness and rattled the world.

“The protests expose the righteous anger and deep frustration in black communities with police actions and practices that disproportionately claim the lives of African Americans,” contends Dr. Corey D.B. Walker, an ordained American Baptist minister and a visiting professor of leadership studies and the humanities at the University of Richmond.

Black Americans account for less than 13 percent of the population, but they are shot and killed by police at a rate that's over twice as high as that of white Americans.

Over the course of a lifetime, black men face a one in 1,000 risk of being killed during an encounter with police, a rate much higher than that of white men according to a report published August 2019 in “Proceedings of the National Academies of Sciences.”

“Black men are living in fear,” says Dr. Jonathan C. Augustine, national chaplain for Alpha Phi Alpha Fraternity, Inc., the first intercollegiate Greek-letter fraternity established for African American men. “The protests and the riots are the result of individuals who feel their voices are not being heard, and their lives are being marginalized.” The fraternity, organized in 1906, has a long history social justice involvement which includes its “A Voteless People is a Hopeless People” voter registration campaigns.

The deep-seated and unmitigated pain of intolerance for injustice has poured into our streets.  And while the majority of the protests across the nation have been peaceful, it is the violent confrontations that flood social media and make headlines. It’s the gutted and charred buildings, the graffitied aftermath that reminds us of what occurred throughout the night.

And now we know much of the vandalism, looting and destruction is being done by outside provocateurs, extremist groups and those simply exploiting the moment. Instead of tamping down the violence, unfortunately, President Trump has amped it up.

Last week, the President directed police to use tear gas, flash grenades and mounted police to disperse peaceful protestors in front of the White House to clear a pathway for a photo op at the historic St. John’s Episcopal Church.

Thankfully, a growing chorus of religious leaders are objecting to the President’s awkward use of the Bible and the church as a prop and backdrop to convey the image of religiosity. Bishop Mariann Edgar Budde of the Episcopal Diocese of Washington expressed outrage over the president’s unannounced visit to the church to share "a message antithetical to the teachings of Jesus.”

The presiding bishop of the Episcopal Church, Michael Curry, said Trump had “used a church building and the Holy Bible for partisan political purposes.”

"This was done in a time of deep hurt and pain in our country, and his action did nothing to help us or to heal us," added Curry, the first African American to hold that leadership post for The Episcopal Church.

The nation is in chaos. Figuratively, the house is on fire. Regrettably and counter-productively, the President is tweeting anger and rage during this present crisis. I’m reminded of the myth of Nero playing the fiddle while Rome burned.

In response, I find myself reading and rereading the communal and individual laments in Psalms for solace and inspiration. My soul cries out: “God is our refuge and strength, a very present help in trouble” (Psalm 46:1). I turn to the prophetic voices in scripture. I envision the prophet Amos’ vision, when he declared, “But let justice roll down like waters, and righteousness like an ever-flowing stream” (Amos 5:24). I look at the rich history of freedom fighters down through the ages. I listen to the voices of a diverse choir of protestors in 2020 singing together, “We shall overcome.”

As a black man raising three black sons in this Trump era, life for us is far from the idyllic world of Fred MacMurray’s “My Three Sons.” And now, with the pandemic, for black men, the coronavirus is a blatant reminder of the many masks we wear in order to survive.

I’m holding on to hope for my three sons. They tell me that we can rise out of this moment, “bigger, greater and more powerful than ever.” All voices have a right to be heard.

I’m holding on to hope for generations yet unborn.

A glimmer of hope is that principled people — especially young adults, Millennials, post-millennials — still want to believe in America’s bold declaration: “We hold these truths to be self-evident, that all men are created equal, that they are endowed by their Creator with certain unalienable Rights, that among these are Life, Liberty and the pursuit of Happiness.”

A glimmer of hope is that young adults are using social media to remind businesses about the power of the dollar.

A glimmer of hope is that organized and passionate peaceful protests are calling attention to police brutality on people of color, and the disparities we see in our neighborhoods. There are persons of goodwill — allies, “a beloved community” — who are marching hand-in-hand as a poignant expression of what Ibram X. Kendi calls “antiracism.”

In “How to Be an Antiracist,” Kendi writes: “An antiracist policy is any measure that produces or sustains racial equity between racial groups. By policy, I mean written and unwritten laws, rules, procedures, processes, regulations, and guidelines that govern people.”[i]

Kendi argues that it’s not enough for someone to self-identify as “not racist” because that signifies neutrality. He writes, “The opposite of ‘racist’ isn’t ‘not racist.’ It is anti-racist.”

The “anti-racist” is locating the societal problems in power and policies, and then working to transform them so all persons can experience their full personhood.[ii]

A glimmer of hope is when we move from talk to action. In Virginia, Gov. Ralph Northam announced the Robert E. Lee monument in Richmond will be removed. The Norfolk City Council has said it’s removing the city’s marble and bronze Confederate war monument.

A glimmer of hope is when police officers and peaceful protestors walk together. This is occurring in neighborhoods across the nation. I see it in the city where I minister where we have an African American police chief.

During one of the recent rallies in Norfolk, Police Chief Larry D. Boone took time to listen to the concerns of the more than 300 people gathered at the Norfolk Police Operations Center. He walked with the protestors and described their demonstration as “a model for the world to see.”  They asked tough questions and Chief Boone answered them.

Since Chief Boone came on the job, the number of reported incidents has dropped. And year-to-date crime — including violent crime and property crime — are down 13 percent. The chief credits the reductions to his hardworking officers and an active and concerned community working together.  It’s not perfect, but it is progress.

We’re offered a glimmer of hope when we see police officers and protestors — multicultural and intergenerational — united in the cause to end racial injustice. This becomes an aspiration for every neighborhood and community.