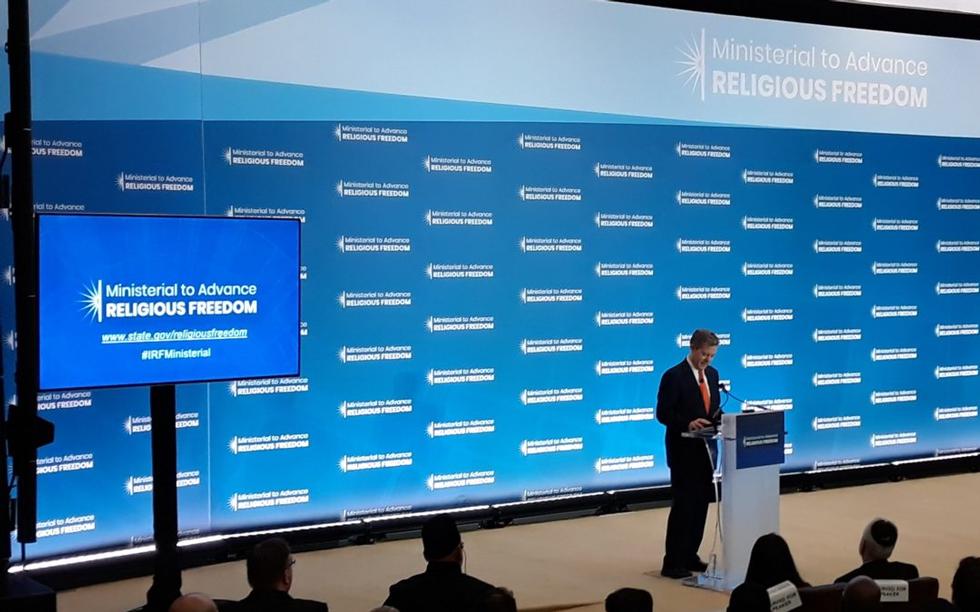 “Despite our many differences, everyone here agrees on the need for religious pluralism,” noted Secretary of State Mike Pompeo at the opening session of the second Ministerial to Advance Religious Freedom. “We all agree that fighting so that each person is free to believe, free to assemble, and to teach the tenets of his or her own faith is not optional—indeed, it is a moral imperative that this be permitted.”

With more than 1,000 civil society and religious leaders, and more than 100 foreign delegations invited, this year’s gathering in Washington, D.C., marks the first time a Secretary of State has convened back-to-back meetings of this kind on the same human rights issue. The first Ministerial to Advance Religious Freedom was held in July 2018.

Secretary Pompeo recently announced the establishment of a Commission on Unalienable Rights, to furnish advice for the promotion of individual liberty, human equality, and democracy through U.S. foreign policy. In his opening remarks, Secretary Pompeo expressed his “hope that this ministerial will inform that discussion.”

Pompeo noted, “All people from every place on the globe must be permitted to practice their faith openly – in their homes, in their places of worship, in the public square – and believe what they want to believe.”

The day’s events included remarks by Ambassador at Large for International Religious Freedom Sam Brownback, presentations by survivors of religious persecution, and a discussion of the challenge of religious freedom in China with U.S. Speaker of the House Nancy Pelosi and Representative (ret.) Frank Wolf.

Rep. Wolf called the persecution in China “the worst we’ve seen in 30 years.” Speaker Pelosi concurred. “What is happening in China is a challenge to the conscience of the world,” she said.

Meeting earlier this month in Nassau, Bahamas, the Baptist World Alliance (BWA) General Council expressed concern over the crackdown on religion in China including the “detention of more than one million Uighur Muslims and the persecution of Christians and churches in China.”

Part of a broader statement on recent instances of religious intolerance and religiously motivated violence that continue “to pose a significant threat to individuals and societies across the globe,” the BWA also decried “the well-documented rise of anti-Semitism around the world…the increase in Islamophobia across the world,” and the “significant rise in global Christian persecution.” BWA cited the recently published reportcommissioned by the UK Foreign and Commonwealth Office, which found that “approximately 250 million Christians suffer high levels of persecution or worse.

Lord David Alton, Member of Parliament, closed the first day of the Ministerial with a call to action. Referencing a quote often attributed to Dietrich Bonhoeffer— “Not to speak is to speak. Not to act is to act”—Alton asked, “How will we speak? How will we act? What are we going to do about it? And now, not later.”

Curtis Ramsey-Lucas is editor of The Christian Citizen, a publication of American Baptist Home Mission Societies