Motorcycles, Tribalism And America – What I Learned Riding In Rolling Thunder. 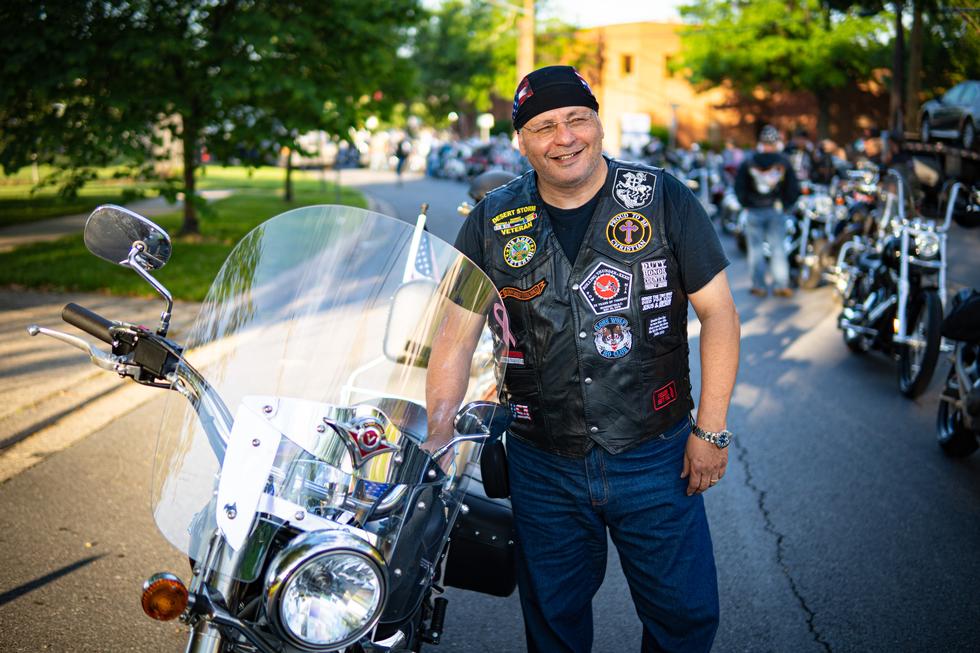 Motorcycling, like America, is composed of various tribes. If one decides to scratch the itch of becoming a motorcycle rider, a much more complicated set of decisions arises. Which tribe shall I become part of? Choosing one’s bike and riding style also involves selecting the social group one will ultimately join. It will also determine fashion choices, the bars and restaurants frequented, the kind of safety protection one rides with (and peripherally, the degree to which one is willing to be injured), and numerous other factors both overt and subtle. Choosing a bike means choosing a tribe.

Perhaps the largest and most well-known is the Harley-riders tribe. This tribe is distinguished by a disdain for any motorcycle not made in America, for to ride even a Japanese-made cruiser, indistinguishable by most people from its premium-brand counterpart, is something of an act of disloyalty. To belong to this tribe displays an attitude, a kind of defiance. It is a lifestyle: to ride a Harley Sportster is to only dip one’s toe in. A Street Glide or bagger signifies a deeper dive. A custom bike with a half-helmet signals a full embrace.

There are other tribes as well. Sportbike riders have their favorite brands, their unique style of colorful, tight leather, sleek helmets, and attitudes. Adventure bike riders can be seen on large bikes with knobby tires and hard panniers and decked in enough protective gear to ward off mud, tree branches, and other threats. Hipster city-dwellers riding Triumph cafe racers can be seen decked in form-fitting distressed brown leather with matching boots, gloves, and riding jeans. And within these tribes, there are subcategories: rice-rocket riders, Ducatistas, hooligans, and the list goes on.

I might self-describe as an aspiring adventure-riding Ducatista, decked in a high-visibility yellow jacket no matter how hot it gets outside. My choice of this tribe is why my friends will no doubt find it odd that I rode in “Rolling Thunder,” one of the most massive motorcycle rallies this side of Sturgis.

Rolling Thunder began in 1988 as a protest by Vietnam veterans. Loud, thunderous motorcycles have converged on the nation’s capital every Memorial Day since its founding, calling attention to missing-in-action soldiers, prisoners of war, and the underlying problem of the U.S. Government’s inability to keep its promises to those who made great sacrifices in America’s wars. It has historically attracted thousands of riders who come from all parts of the country, gathering at the Pentagon and riding through the National Mall on the Sunday before Memorial Day. It’s a spectacle around which mixed feelings exist.

This year was to be the last ride as the organizers had announced their decision to call it quits. This news brought many thousands more to Rolling Thunder, fence-sitters who needed an extra nudge to be a part of this part of post-Vietnam aftermath. I was not planning to attend, although I did briefly entertain the notion. A late-night text the night before urging me to come changed my mind.

With a few thousand other riders, I lined up at a Harley dealership near my home. I had been concerned that my Ducati might stick out like a sore thumb; serendipitously, I was able to join a group of sportbike riders and imagined that others would be along as well. The ride that took us down an ordinarily gridlocked interstate to the Pentagon was thrilling. Families were gathered on blankets beside the road, waving to us as we rode by. Bridge overpasses were filled with people awaiting the sound of so many loud motorcycles. It was almost an out-of-body experience for me to be part of something like this.

When we arrived at the Pentagon, I quickly realized I would be there for a long time. The parade was not set to roll out for at least two more hours. It was evident from the number of bikers that it would be hours after that, and the exits quickly closed up. There I was, waiting in the biggest traffic jam I had ever seen. And while I was surrounded by the sportbike club from earlier, it was all Harleys from there, as far as the eye could see.

Beyond the leather vests and bandanas, I read the t-shirts in the gathered crowd. One read, “Namaste,” which got my attention. Beneath this was a logo with two automatic rifles, and the words, “Peace, love, and superior firepower.” One person nearby wore a “Trump 2020” cap, his snow-white goatee dyed red, white, and blue.

Confederate flags abounded, worn as caps, patches, or embroidered onto leather vests. The misogyny was widespread and breathtaking. And fifty years later, Jane Fonda is still considered a traitor.

But being in such close proximity, and in common cause, one finds an opportunity to be in conversation with people who reside in different tribes. It’s easy to reach across the aisle when the guy next to you is riding such a cool machine.

In one such conversation, I heard a veteran describe the similarity between riding his bike and flying a helicopter. “They’re the same because you lean into a curve and you’re not afraid of falling out because you’re one with the machine.” Out of seemingly nowhere, he launched into a tirade. “You know what brought down the Soviet Union? Socialism. Venezuela was a prosperous, thriving country, and then they brought in socialism. Now look at it! It’s a disaster!”

I imagined that the parking lot surrounding the Pentagon was filled with tens of thousands of people who might have the same things to say. Here I was, a progressive Christian in the midst of Trump Country.

In these conversations, I learned a few things. I learned that these veterans experienced the worst, most traumatic years of their lives in war. At the same time, the experiences they had in Vietnam and in other places were the most powerful and important. Something about these bikes, the culture, and the tribe made them feel alive.

I also heard that they are deeply distrustful of a government that has lied to them and has broken promises. As so many are veterans of the Vietnam war, they have good reason to be bitter. The mixture of pride in serving their country, sacrifice, and connection to their fellow veterans, coupled with fury over the injustices they’ve suffered since creates a bond that is powerful and unbreakable. These guys know what it feels like to be let down by the government. Who can argue?

Which brings me back to the man who, on Sunday, tweeted that he would do everything in his power to make sure this would not be the final “Rolling Thunder,” President Trump. Trump is their man. Trump hates this untrustworthy system as much as they do. I’m not sure if they believe he will change the system for the better, but they sure seem to believe his story is their story. Trump, a man who rose to power under the most unusual circumstances, relentlessly pursued by dark forces within a behemoth government that’s out of control. Trump, pursued by James Comey, Robert Mueller, and Adam Schiff just as their own lives were ruined by Lyndon Johnson, Robert McNamara and the “best and brightest.” And he has heroically assumed power in a way they never could.

If “Rolling Thunder” comes back for another year, will I ride again? I got fed up with an interminable wait in the parking lot, found a way out, and rode home before I could take a lap around the National Mall. If I do, I will ride because this gave me tremendous insight into something that was previously difficult for me to understand.

I still believe the church is where different tribes come together to worship the same God, even as we have demonstrated throughout the centuries that even then, we are capable of seeking division over unity. But other experiences can lead to revelation also. I’m willing to consider that there are few substitutes for being stuck in a parking lot for four hours speaking with people who belong to a different tribe than you do.

Rev. Steven D. Martin is director of communications and development, National Council of Churches. He loves his job but finds it more enjoyable on the days he rides his 2014 Ducati Hyperstrada 821 to work.